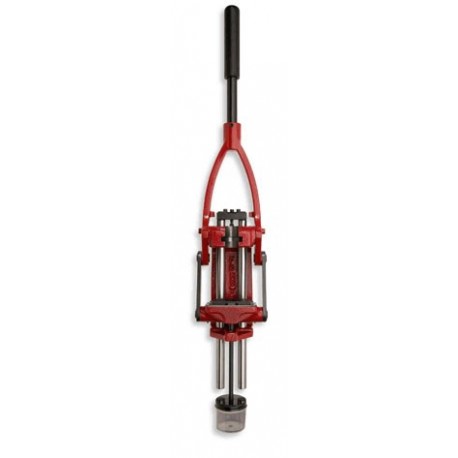 This product is no longer in stock

Notify me when available

No need to complicate the reloading process. Our Co-Ax® Reloading Press keeps it simple while still delivering famous Forster precision.

The Forster Co-Ax® Reloading Press comes with several unique features that help make it truly one of a kind, including:

Our Co-Ax® Shell Holder Jaws Are Your Assurance Of Perfect Alignment.

When we originally tested our unique shell holder design, we full length sized two-hundred once-fired 300 H&H Magnum cases dry and unlubricated. We neither pulled the rims off the cases nor did we stick a case in the die. The heads of the cases and rims were unmarked by the shell holder jaws because the shell holder actually floats and permits the cartridge case to find its exact center in the die. (Don't try this at home, though! We do suggest that you use lube.)

When a case is in the shell holder it's supported by spring loaded jaws which contact the base of the cannulure for more positive extraction. The shell holder is also self acting, so when a cartridge is placed in the die and the handle of the press is activated, the jaws can open and close on the cartridge case. When the handle is raised, the jaws automatically open and release the case.

Proper priming is one of the most critical operations in the reloading process. In order for your ammunition to perform efficiently, consistent ignition is absolutely mandatory. For that reason, we paid special attention to the priming function in the design of our Co-Ax® Reloading Press. The primer seater in our press is engineered with such precision that no excessive tolerance or “slop” is required in any of the mating parts. The primer seater moves freely in its channel with only .001" radial clearance as opposed to the customary 1/16" clearance required by most other presses. As illustrated in the two drawings of enlarged views of our primer post, the extremely tight tolerance delivers remarkably consistent seating depth time after time.

A Primer On Primer Seating

Illus. 1: IMPROPERLY SEATED - This primer is improperly seated, preventing the cups of the primers from resting solidly on the bottom of the primer. Some primer cups measure .120” in height, and if seated with crowns more than .004” below the case head, the anvil would be forced through the crown, rendering the primer useless.

Illus. 2: IMPROPERLY SEATED - This primer is improperly seated too high. A high primer is erratic in performance. It is also dangerous and could explode in the chamber of a rifle when the breech block closes on it before it is locked.

Illus. 3: PROPERLY SEATED - This primer is properly seated, exactly as it would be with our Co-Ax® Reloading Press. The crown is .004” below the surface of the case head; the anvils are on the bottom of the primer well; and the primer mix is properly stressed by the anvil for sensitivity. It is also much safer than either of the two seated primers shown above.

The Primer Catcher on our Co-Ax® Reloading Press works so well, it brings your reloading out of the basement and into the living room. With our unique system, there's no more carbon, ground glass, spent or live primers to clutter up the floor or contaminate the working parts of your press. The Co-Ax® Reloading Press's drop tube, which is threaded into the carrier below the shell holder, directs all spent primers and other residue into a jar below the press. The tube and the jar follow the carrier during the sizing and seating process. Simply remove the jar to empty it.

Be the first to write your review!

30 other products in the same category: